Does ExpressVPN work on Linux? Yes, it does! Unlike other VPNs, ExpressVPN does offer a support on Linux, specifically for 64-bit and 32-bit versions of Linux (Ubuntu, CentOS, Debian, Fedora, Arch, and Raspbian (32-bit).

Setting up a VPN on most operating systems can be a little difficult to get started, and most users have a tough time setting up VPNs on Linux OS – it’s different with ExpressVPN. ExpressVPN is one of the few VPNs in the industry that supports Linux, and setting it up will be a breeze with our step-by-step guide.

Because ExpressVPN offers support towards Linux, it makes the set-up procedure a whole lot easier. Plus, pairing the two together means better security and privacy levels for all your internet activities and device. There are two ways to set up ExpressVPN on Linux, which is through the ExpressVPN app for Linux, or using the OpenVPN client.

How to set up ExpressVPN on Linux via the app

Before getting started, you first need to subscribe or sign up with ExpressVPN. The cheapest deal right now is the 1-year plan, which you can get a great discount for during the ExpressVPN Black Friday offer. After that, head to the tutorial below on how to install ExpressVPN on Linux via the app.

To begin, and for the first step, you need to download the installer. Make sure it’s compatible with your Linux version:

If you’re using the 64-bit Linux distro, then download the 64-bit installer. 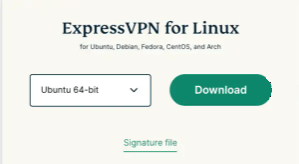 Install and activate the app

How to set up ExpressVPN on Linux via OpenVPN protocol

Once this is done, make sure you leave the terminal window open so that the VPN connection remains active. Simply minimize it.

How to use ExpressVPN on Linux

Now that you’ve installed and set up ExpressVPN on Linux, using any one of the two methods on top, the guide below will show you how to use it. To begin, you need to first:

Connect to a server

Connect to a different VPN server

For example, within the [Location] bracket, enter in a specific location, like expressvpn connect [Toronto]

Disconnecting from a VPN server

Now, if you need to disconnect from a server, go to your terminal and run the following command:

When this is done, you will receive a notification saying that the VPN has been disconnected.

How to change or use a different VPN protocol

Using a particular protocol gives you a different experience altogether. You could always use the default protocol, but if that’s not something you want, take a look below at how you can switch ExpressVPN protocols on Linux.

To switch to Lightway – TCP, run the following command:

For the Lightway – UDP protocol, run the following command:

To switch to OpenVPN – TCP, run the following command:

For the OpenVPN – UDP protocol, run the following command:

To switch to an automatic protocol, run the following command:

How to uninstall the app

To uninstall the ExpressVPN app on Linux, use the following commands:

You now know how to install and use ExpressVPN on Linux using the Linux app, and manually via OpenVPN configuration. Compared to most operating systems, Linux is by far one of the safest. However, to enhance the overall security and privacy online, or to bypass ISP throttling, pairing a VPN like ExpressVPN with Linux is a great idea.