Why do you need a South Korean IP address?

Firstly, if you’re anyway outside South Korea, there are chances of you being locked outside of most South Korean streaming services, or websites. This is due to geo-restrictions or geo-blocks. It’s one of the most annoying things but it exists.

Plus, if ever you’re going for vacation, you won’t be able to access any of your South Korean banking accounts. Even if you’re living in South Korea and want a little more freedom and privacy online, getting yourself a VPN that offers a South Korean IP address is the best and safest way around the issues.

You will also be able to bypass something called ISP throttling. It happens most cases of the time. It’s when your internet service provider throttles both your speed and bandwidth, causing major issues while users are streaming or torrenting.

There are a couple of VPNs that offer a South Korean IP address, but not all are able enough to offer other features – or rather perks. Besides looking for a VPN that offers a South Korean IP, you need to consider other things like its server coverage, its speeds, the security front, its apps compatibility and more. Keeping that in mind, I’ve tested and chosen around 3 providers that are the best choice overall, they are:

1. ExpressVPN is our number one choice for offering a South Korean IP address

ExpressVPN is known worldwide as one of the most reliable and best VPNs in general. It is why it often tops the list as the best for unblocking numerous streaming services worldwide. ExpressVPN offers around 3000+ servers in 94 countries, with around 1 server in South Korea. There are thousands of South Korean IP addresses linked to it. Other than looking it up on the app, I contacted the chat support just to re-confirm since it previously offered two. Here’s a shot from the chat taken today (September 2nd 2021):

Other than South Korean content, you will be able to access much more than that, like Netflix, BBC iPlayer, Hulu, and others. ExpressVPN is known for its superlative unblocking abilities which is why it tops the list.

Where security and privacy online is concerned, ExpressVPN again takes the reins. It offers apps that operate using AES 256-bit encryption, with an active Kill Switch feature that you can enable from the app itself. Furthermore, ExpressVPN offers leak protection, recorded when I tested and reviewed the app. It keeps all your web-traffic secure.

Not sure about investing just yet? That’s alright! ExpressVPN offers a free trial and a 30-day money-back guarantee, for which you can use to test the app. ExpressVPN is a little overpriced, but you should know that it is also one of the best vpns for multiple devices, for maximum protection. If you don’t like the service, you can always ask for a full refund or cancel your account.

NordVPN might be second on this list but don’t let that fool you. This one-of-a-kind VPN is a force to be reckoned with, especially taking a look at how much it offers for online protection. It usually gets great reviews, which is why is usually tops every best VPN list.

NordVPN offers around 5200+ servers in 59 countries, out of which 10+ servers are in South Korea. 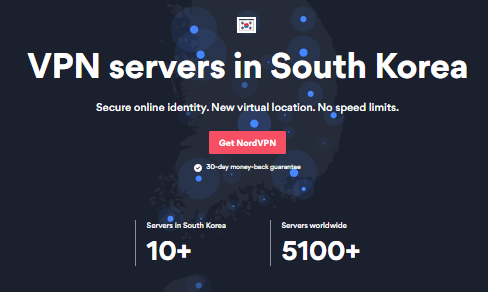 Each of these servers are optimized for unblocking some of the most popular websites, streaming services and apps. Accessing South Korean channels or networks along with local bank accounts shouldn’t be an issue with NordVPN.

In fact, when I reviewed the NordVPN app, I tested out its unblocking abilities. I got access to many platforms like Netflix, BBC iPlayer, Hulu, Amazon Prime, and even got access to South Korean channels like MBC-TV Seoul HLKV-DT, and MBC Sports+. The speeds were some of the fastest results I’ve gotten till now.

On the matter of online protections or online privacy, NordVPN is the best. It supports a strict no-logs policy and has also undergone audits to prove its transparency. Even though there may have bee some glitches a while ago, the NordVPN support fixed it.

Other than that, there are DoubleVPN servers for double the anonymity and encryption. Speaking of encryption, NordVPN operates using AES 256-bit encryption. Other VPN features include a Kill Switch, a CyberSec feature, leak protection and more.

I believe the NordVPN packages to be quite affordable, however, you can also test the app. NordVPN offers a limited free trial and a 30-day money-back guarantee. Other than this, if you’re looking for a business VPN, this provider offers one called NordLayer.

3. CyberGhost is a user-friendly VPN and the most affordable one that offers South Korean IP address

Last on the top 3 list, we have CyberGhost. It offers around 7000+ servers in 91 countries, with around 24 South Korean servers in 1 location. What we love about CyberGhost, is that most of its servers are optimized mainly for streaming.

You would usually find a couple of them labeled against the service or platform it unblocks. As for South Korean platforms, simply connect to any one of the South Korean servers to access them; it works.

The CyberGhost VPN app is user-friendly and come with great privacy centric features, which is why most users love it. Apart from unblocking South Korean networks or channels like EBS1 TV, or MBC Drama, CyberGhost is the best for unblocking other international services like Netflix, Hulu, Amazon Prime, or even Hotstar, and more.

Another reason why CyberGhost is a top choice is because of its privacy and security features. There are a couple of in-app features that you can enable like Block Ads, Block Malicious websites, AES 256-bit encryption, IP and DNS leak protection.

The fact that CyberGhost offers a Split-Tunneling feature means that you will be able to securely access South Korean channels and pass only those apps through the VPNs tunnel. There are more to go through and test using the CyberGhost free trial and 45-day refund period.

Will a free VPN offer a South Korean IP address?

There is no saying, mostly because free VPNs often don’t offer a large number of servers to choose from. You will hardly find around 10 or less servers. Plus, accessing South Korean content means you need security and privacy measures, which is something a free VPN can’t offer. The VPNs on this list offer a free trial and a refund period, which is something to consider rather than going for a completely free VPN.

Is it illegal to use a VPN in South Korea?

Using a VPN in South Korea, but be careful as accessing certain websites or content there is considered illegal. If you get caught by the South Korean government, there are consequences. Make sure you use the VPN wisely and safely, because we at topVPNservice do not condone the violation of these terms.

And that’s about it! You now know how to get a South Korean IP address using the best VPN. We’ve recommended 3 top VPNs on the list above that are usually the best in multiple areas. Just in case you’re on a budget, these providers offer deals, which you’ll find on our VPN deals and discounts page.