ZenMate claims to be affordable, have the best security, lightning speeds, and more, but is it really worth your investments? I’ll be going through all its latest updates in my ZenMate review. Keep reading!

When talking about a great VPN, we look for all-around security measures and great speeds that cater to streaming and P2P file sharing. We live for the internet, but at the same time have to make sure all our online activities are secured.

Find out if ZenMate really is all that it claims to be, in my in-depth review. We know that it used to be a good budgeted VPN for premium users and makes a considerably decent choice for free access with limited features.

ZenMate VPN Review – At a Glance

ZenMate VPN According To My Rating Criteria

Just like every other VPN in the market, most of us just want one that either has the best security, fast speeds, or abundant server locations. One that makes it easy for us to access multiple websites, some of which, are restricted.

But to choose the best VPN for you, you’ll have to test the VPN on your own. For this reason, I will test out ZenMate VPN  according to the following:

Okay, so before moving on to the main features of ZenMate VPN, let’s get a clearer image of how much money we’re going to be spending on it.

ZenMate used to have a steep price range back in 2020 but has managed to update its packages with a bigger discount this year in 2021. I didn’t recommend the VPN last year, but let’s see if things have managed to change for the good.

A big part of coming one step closer to the conclusion starts with first taking a look at the prices.

This is what the price packages used to be in 2020: 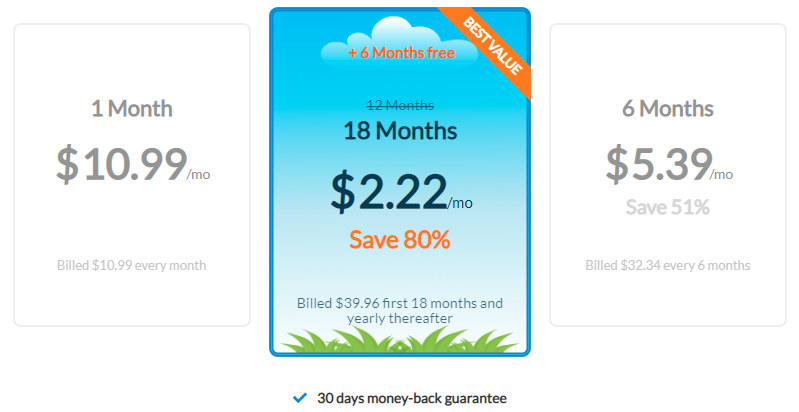 The monthly package is still the same, however, there is a bigger discount recorded in the 1-year and 3-year packages.

ZenMate VPN services are down-sized to only two payment plans. These are:

Additionally, Zenmate now has a new subscription plan for browsers. It now costs around $1.99/mo. + two months free, which is a huge discount from its previous price of $4.49/mo. 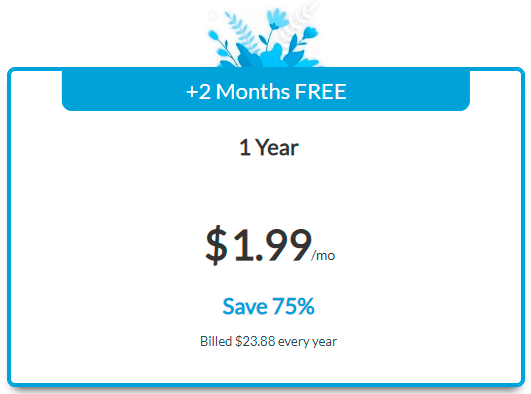 One of the best things about a ZenMate review is the fact that there’s a free 7-day trial to look into. This is for anyone who is curious enough to test the VPN out.

It, however, doesn’t include a wide platform of features or servers. The ZenMate VPN free app only comes with a limit of four server locations, in comparison to what a paid premium or ultimate subscription would get you. Its speeds are only at a maximum of 2 MBs, which isn’t enough.

Another rock on the road is that its services are also only dedicated to browser extensions; encrypting the data that passes through it.

When compared to other free trial VPNs, there’s not much to look into. Most VPNs with free trials come with basic security at the least.

Apart from having an okay price range, ZenMate offers a 30-day refund policy per subscription.

So, if you feel like testing the VPN out for more than just 7 days and not an entire year, you’ll probably want to go for the paid subscription and get yourself a refund within the 30 days of usage.

That to me is a plus point.

Location – Is ZenMate part of a safe jurisdiction?

When we talk about where a VPN provider is located, it usually refers to how safe that locality is in terms of data retention laws or within the perimeters of the 14 eyes.

In the case of ZenMate, it’s a German-based VPN; marking it an unsafe location. The country is known to be part of the 14 eyes agreement, which usually shares its users’ credentials with other countries within the alliance.

This makes its location unsafe causing a shift in the reliability of VPN. However, I usually gather up other user reviews before judging a VPNs security level too harshly.

So, here’s what a remark from a Reddit user was, concerning its safety:

ZenMate used to have around 1500+ servers in 35+ countries. But, as of 2021 managed to considerably increase its server count.

It now has around 3000+ servers in 79 countries! That’s a great jump in the right direction especially where accessing restricted streaming services is concerned.

ZenMate VPN also happens to be P2P compatible. But, to determine how safe its services are for torrenting, we’ll have to review the ZenMate VPN security features.

Apart from this, the VPN also features DNS servers, perfect for protecting you against any DNS leaks.

We’ve been through the pricing plan which wasn’t all that thrilling as compared to what it used to be and we’ve also been through ZenMate VPNs locality.

That determined whether it’s actually secure or not, and since it’s German-based, it definitely sparks a code red.

Moving on from this, let’s see if its security measures tick every safe box that a VPN should have. 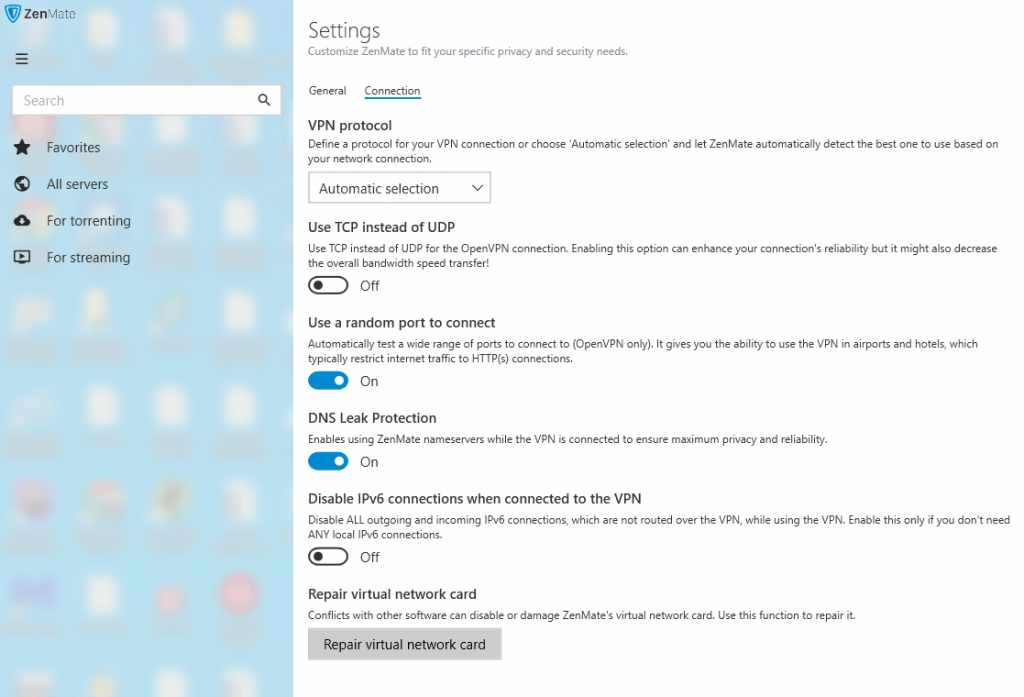 Coming towards tunneling protocols, I’m happy to say that it does support all the major protocols that are required to establish a secure connection. It has:

When we talk about VPN encryption, the best in the industry is always military-grade AES 256-bit encryption, which is proven to be unbreakable.

On the other hand, some reviews seem to mention that for ZenMate browser extensions, instead of using 256-bit encryption, it uses AES-128-bit, which is still considered reliable security.

But! When I contacted the support chat and asked them to re-confirm the above statement, they said:

Which is a plus point!

There’s always a rule when choosing a good VPN. Always check for its security features to see if they’re top-notch. Among these features, always make sure it comes with a Kill Switch.

ZenMate, however, does in-fact come with a Kill Switch, which you can turn on or off depending upon whether you need it or not.

On the other hand, the ZenMate app for mobile devices (iOS and Android) do not come with one. 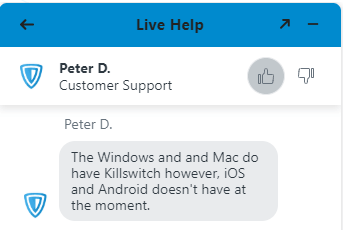 All those annoying ads that constantly interrupt your online activities, need to definitely hit the road.

In these cases, it’s wise to choose a VPN that provides an Ad-blocker feature. However, ZenMate doesn’t typically offer an Ad-blocking feature but does provide a Chrome extension called ZenMate Web Firewall, that controls ads and ongoing traffic that would hamper your activities.

So far, we’ve been through a number of ZenMate specs, discussing the various positives and negatives the VPN has to offer.

Moving onwards, I conducted some tests and found out that ZenMate doesn’t leak IP and DNS. However, the WebRTC results weren’t so fruitful.

Below you’ll see the results I rendered, while connected to the VPN, using US servers. They are:

For my IP leak test, I went to ipleak.org; connecting to a US server, and the result was:

For my DNS leak test, I went to http://dnsleak.com/  connecting to a US server. The results were:

For my WebRTC leak test, I went to https://browserleaks.com/webrtc connecting to a US server. The results were:

The VPN is divided into having separate server tabs dedicated to both streaming and torrenting.

However, the first thing we often think about when streaming with a VPN is concerned, is if it works well with restricted websites like Netflix.

The good thing is, it does, in fact, work well with US Netflix and other streaming platforms like Hulu, BBC iPlayer, Amazon Prime Video, YouTube, and HBO GO.

You’ll find the servers dedicated to each of them in its list.

But just in case you do happen to test the VPN out for yourself, and are met by this proxy error:

Try and tweak around with the servers to see whether other options work well for you.

Yes, ZenMate is indeed compatible with P2P and as mentioned above, it now has around 3000+ servers, in which some are dedicated to torrenting.

However, it’s best that you don’t torrent any content that has any copyrights over it.

Unfortunately, no, it does not.

For this, I conducted a speed test obtaining results from before and after connecting to the VPN. These were:

The result before connecting to the VPN was:

Speed test after connecting to a US server:

As you can see, the results from before and after VPN connectivity have a huge mile of a difference between them. The results dropped terribly, making it almost 85% slower than before.

On the ZenMate web page, it claims to support all-round compatibility with all the major devices supported by OpenVPN, and the good part is that it’s true!

It supports a number of platforms and also now allows you to connect up to unlimited devices simultaneously, per subscription. It includes:

Speaking of compatibility, the ZenMate apps for mobile clients don’t operate as smoothly as compared to the Mac or Windows client.

It doesn’t, however, support Smart TVs, but can be accessible with the help of the OpenVPN software.

So far, I feel there is a rift in the compatibilities of its features and security measures. It seems to not leak IP and DNS, has reasonably good security encryption and protocols, terrible speeds, a very shady locality (a deal breaker), and an uncertain answer to whether it actually works for Netflix or not.

Taking all that into consideration, I went looking into their privacy policies and didn’t really like what I saw.

ZenMate VPN does claim to have a zero-logging policy. But, that’s just what “they say”. If you look a little deeper into the different privacy policies on their website, you’ll see that what they seem to claim in terms of no-logging doesn’t really match up to what they state.

At first glance, they mention: 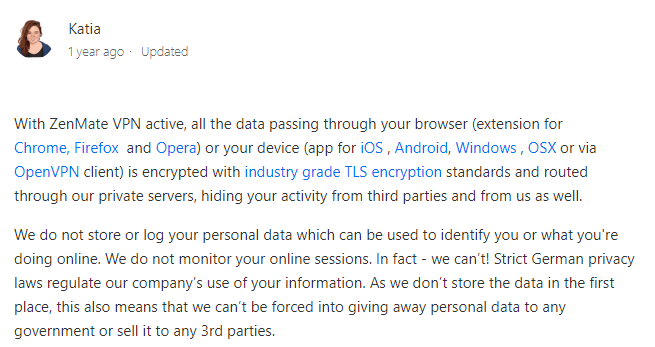 They seem to state that they don’t hold on to any information provided by the users and that they have a strict policy towards respecting the users’ anonymity, keeping whatever they log in or any activity they carry out safe.

They do, however, collect some information that may not be personal or pose a threat to the user itself.

ZenMate has a 24/7 live customer chat, which had seemed to be more than helpful with any queries I put their way. That’s a great thing about this provider since most people are first time VPN users, and often need assistance with setting up or basic inquiries.

ZenMate review – Do I recommend it?

After going through this entire ZenMate review, I don’t recommend it if you’re looking for a solid provider.

ZenMate used to be one of the more affordable VPNs in the market, with reasonable prices for its premium packages, which promote good features, some of which I can’t completely agree with.

The thing is, there are many greater choices that cost the same but provide much more in comparison. Take Surfshark for example. It too allows unlimited device connections but is cheaper in comparison and has much more to offer in security.

Apart from the rate, I do not seem too pleased with what it had to offer.

When we go for a VPN, we look for good security, major protocols, fast speeds (which they lacked), and no data-log policy (which failed).

It does pass the mark in providing access to restricted websites like Netflix and BBC iPlayer but still is a little shaky as compared to the views of other users.

All coming down to its jurisdiction; being a German-based VPN and located within the 14-eyes alliance, it puts a major dent into things.

However, if this ZenMate review caught your attention and you still feel like going for it, needing limited features for small scale surfing or streaming, go right ahead since it’s one of the budgeted options compared to most or …you could always consider other reasonably priced VPNs, which provide amazing services on unlimited devices.