In this iProVPN review, the entire app was put to the test, and all its features were detail-ly analyzed. There were a couple of glitches while connecting to servers, but those were just minor – as most VPNs often have flaws.

If you’re not planning on going through the entire iProVPN review, skip to the very end and see what our final verdict is!

Before we proceed, here’s what you should bear in mind:

Every VPN review is conducted differently, and the results always vary. For instance, the speeds usually depend on how fast your internet is. The unblocking abilities of a VPN also depend on the laws within the country you’re using it in. So many factors come in the way of actually deeming a VPN as “worthy or great”, especially since this VPN is still in the works of greater things.

iProVPN Review – At a Glance

This is just for you to get an idea of what to expect throughout the entire review, and whether or not the app performed well.

From what I gathered so far, iProVPN offers 250+ servers in 20+ countries, unblocks Netlfix, offers 10 multi-connections, and comes with a 30-day refund.

iProVPN – What we know so far

Before going ahead, it’s good to get an entire picture of what I’ll be testing in this iProVPN review. I’ll be highlighting a few points below against what this provider claims to offer and everything I’ll be testing.

All these important pointers and more will be discussed in great detail ahead, but first, take a look at the rating guide below, showing you how the VPN will be analyzed.

In this day and age, online security or cybersecurity measures are extremely crucial, especially with the ongoing flux in cybercrimes.

A VPN is one way to safeguard your digital endeavors. But, how are you going to do that if the VPN itself is unreliable?

For this reason, I’ll be testing and analyzing iProVPN based on:

It’s good to know how much a VPN costs. It paints a clear idea of what services and performance to expect. There are budgeted providers that at times offer the best features and expensive providers that fail to work at all. So, taking a look at the iProVPN price range, you’ll get a clearer idea of what to expect or simply whether or not the VPN is within your range.

Here’s how much iProVPN costs:

The iProVPN prices are pretty affordable if you compare it with many other VPNs. The one-month plan is the most expensive, however, since iProVPN is new, they’re launching a completely free trial over it, which of course lasts only till the first month ends! There’s no saying how long this deal would last, so it’s best to use it while it’s on!

Does iProVPN offer a free trial?

No, there’s no ongoing free trial, but if you take a look above, iProVPN is offering a premium trial period over the 1-year plan. You have to pay $0.99 for a 7-day trial, and then will be charged $24.95 a year.

In addition to the limited free trial, iProVPN is also offering a 30-day money-back guarantee on all its plans. This allows you to test the VPN and see if the performance is overall satisfactory. Here’s a snippet from the iProVPN refund policy taken from the terms of service page. However, make sure you contact the support team for complete details: 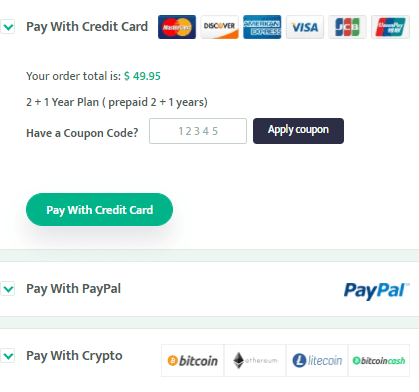 iProVPN is headquartered in the British Virgin Islands. It’s a privacy-friendly location and free from data retention or prying eyes.

You might think that the location of a VPN has nothing to do with buying a VPN, but it does. The main purpose why most users buy a VPN is for online protection. But, what happens if a VPN is located in a country within the 14-eyes regions? It’s an alliance of countries that steal user data, promote online surveillance and censorship, along with sharing data with other countries within the alliance. This is why looking into the provider’s company details plays a big part.

Apart from the safety of the VPN’s location, it’s time to review the iProVPN network coverage. iProVPN is a little over a year old and still within the process of bringing on many new features and servers.

However, iProVPN has around 250+ servers in 20+ countries, which is a decent enough network coverage to access all the popular services or websites. The best part about these VPN servers is that they worked!

Does iProVPN work in China?

There are only a few VPNs that work in China, mostly because the blocks are pretty tough to get through. However, in the case of iProVPN, I contacted the support team and the 24/7 chat, to confirm whether or not the service works there. Here’s what they had to say: 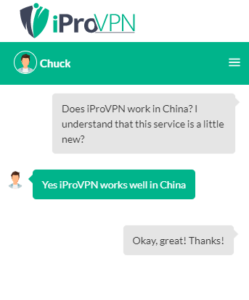 They mentioned that iProVPN does work in China, mainly because the VPN is newer than most, and has not yet been on the radar of detection.

A VPN needs to be built with the best security features and safeguarded with military-grade encryption. Only then can you expect the software to secure your connection, data, device, and more. Where a reliable VPN is concerned, there are a couple of security features that need to be included, like encryption, protocols, ad-blockers, etc. So, with that in mind, let’s take a look at what iProVPN has to offer:

As mentioned above, encryption is important, and luckily, iProVPN operates using the industry’s best, AES 256-bit encryption to create a secure connection from your device, to the internet.

This feature is great for adding only selective websites or apps through the app’s encrypted tunnel. However, it’s only on the Android and iOS phone apps.

I wouldn’t call this a security feature, but it’s an added perk. When you click on it, you’ll be connected to the best and fastest server depending on where you’re physically located.

Besides the above, iProVPN also offers:

This is a part of the app’s security review. It’ll allow you to test whether the VPN leaks any sensitive information, like your IP address. This kind of security is particularly important when you’re trying to access geo-restricted streaming services in countries with high surveillance.

For the IP leak test, I conducted the test on ipleak.org, with a connection to the Netherlands server. The results were leak-free!

The DNS leak test was conducted the test on dnsleaks.com, with connection to the Netherlands server. The results were leak free!

For the WebRTC leak test, I conducted the test on browserleaks.com, with connection to the Netherlands server. The results were leak free! 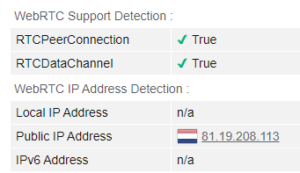 As mentioned above, iProVPN might offer a very small network coverage, but when I ran a couple of tests, the VPN did unblock the US Netflix library. Besides that, iProVPN also works with:

Additionally, iProVPN does work with torrenting platforms, but only on a few servers. You’ll have to contact the support team for that, as the outcome always changes from user to user. However, regardless of streaming or P2P file sharing, everything goes in vain if the speeds are slow. So, take a look below revealing the iProVPN speed test results.

Speed is important where streaming and seeding torrents are concerned. There are many situations where your internet service provider slows down your speed and limits bandwidth, this is called ISP throttling. A VPN can help you bypass these issues, making your overall experience online bearable.

So, how did iProVPN do? Here are the results:

The iProVPN US server speed:

These were just a few servers I connected with, to check for speeds. The iProVPN speeds overall are quite fast, considering my internet speeds without the VPN are just standard. They’re perfect results for HD and 4K streams! 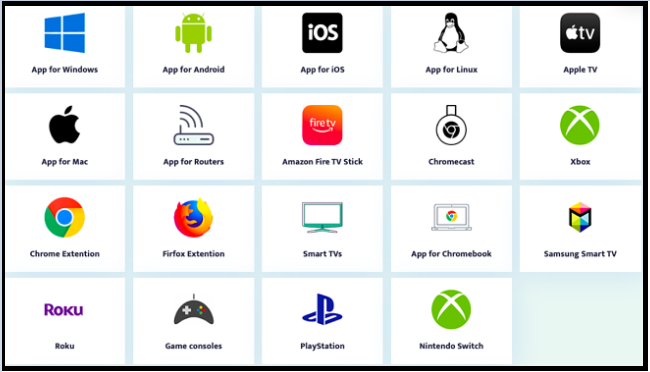 iProVPN supports apps for a number of devices. Some of them include:

The best part is that even though you have a tough time setting a VPN connection on a couple of devices, the iProVPN support page offers a number of VPN setup tutorials that you can go through. Other than that, you can always contact the support chat.

I ran tests on the Android, iOS, and Windows app, and gathered results from all collectively. I feel like the Android app works better in speedier connections and the security aspects worked smoother on Windows. The iOS app was somewhere in between both.

However, all the apps had a user-friendly interface and a functional Kill Switch, even on the iOS app. The Split-Tunneling feature is only available for the mobile apps. The iProVPN iOS app was slightly similar to the Android in overall functionality.

The apps had a smart connect switch, which allowed me to connect to the fastest server. However, you’ll have unlimited server switches depending on what platform you’re trying to unblock. Take a look below to see what each of the app’s features and the interface looked like upon connection: 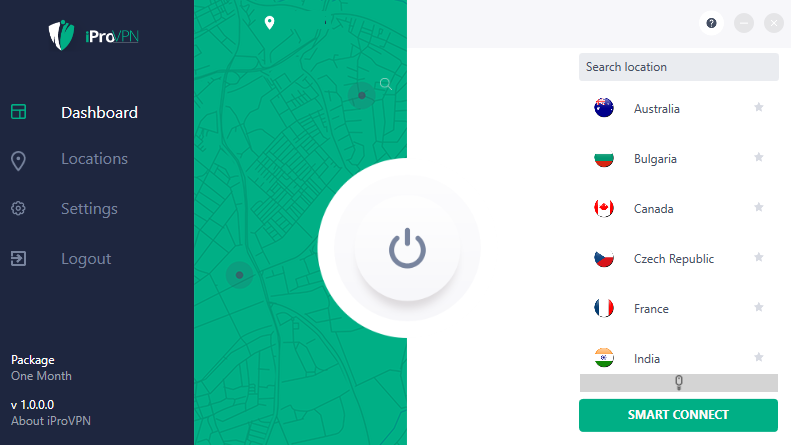 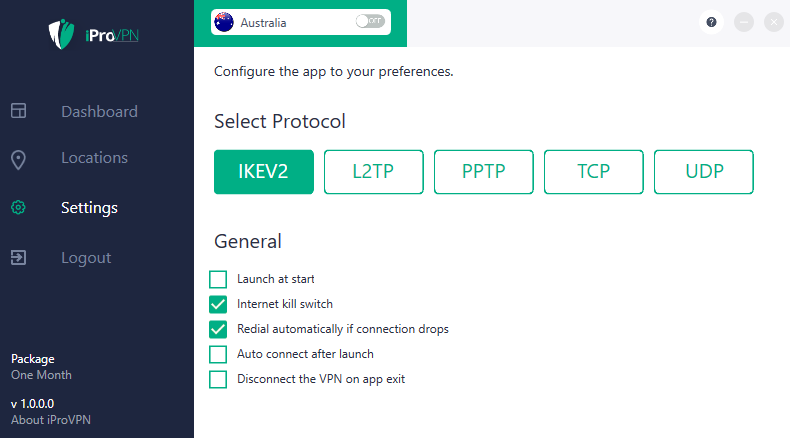 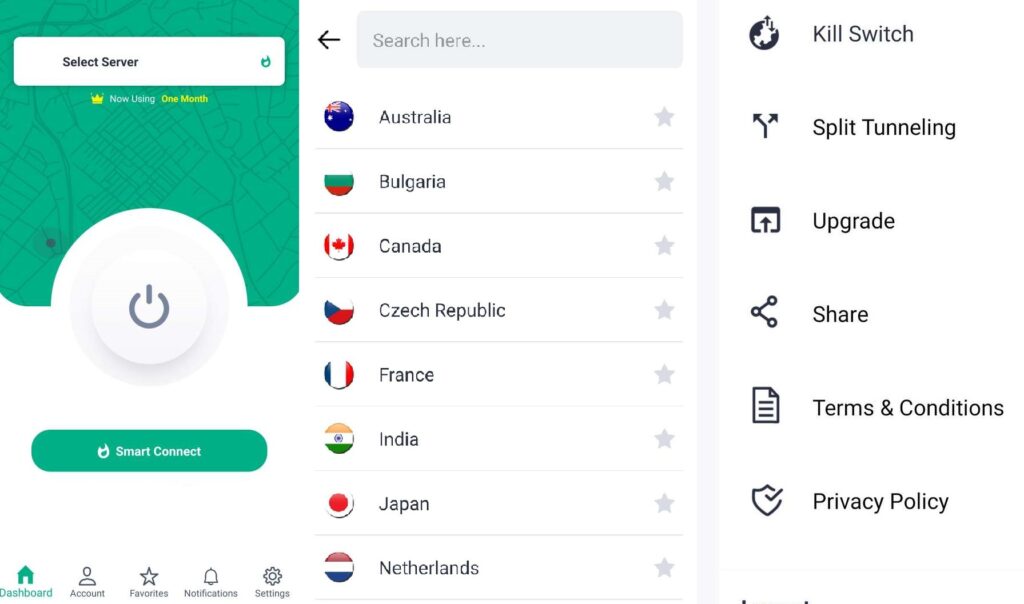 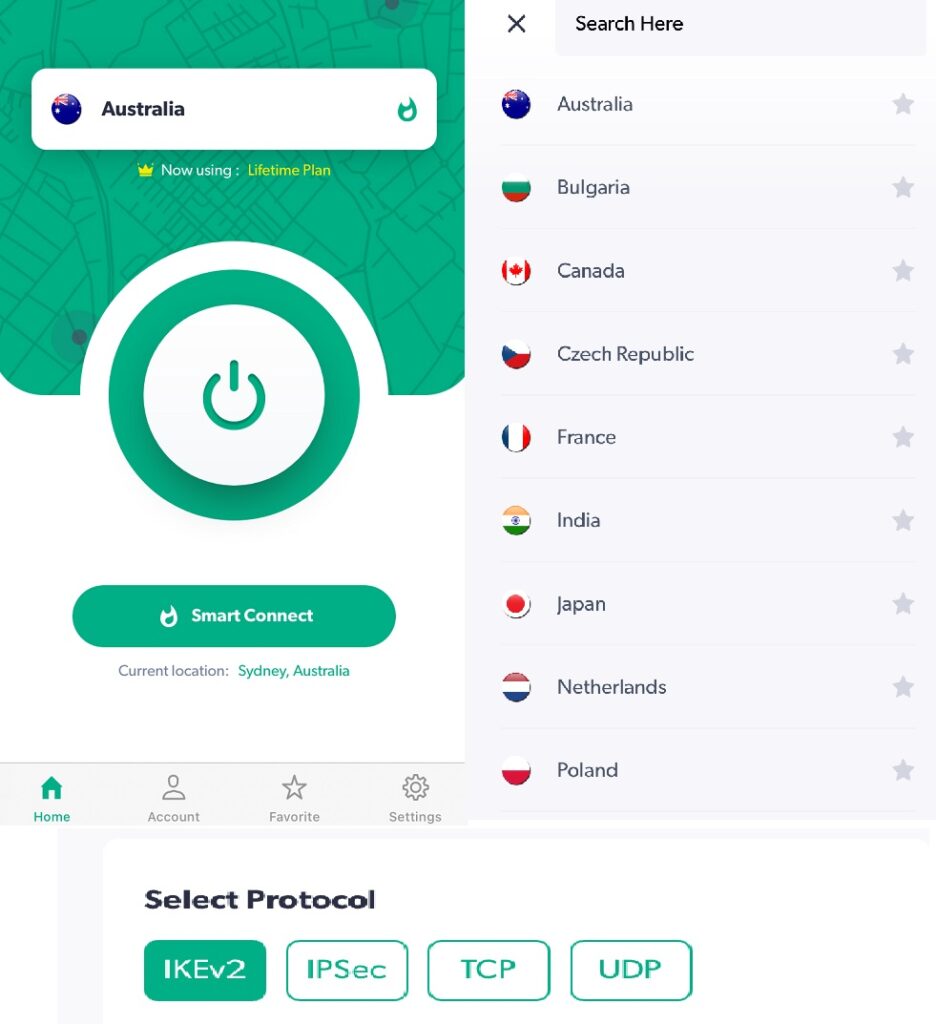 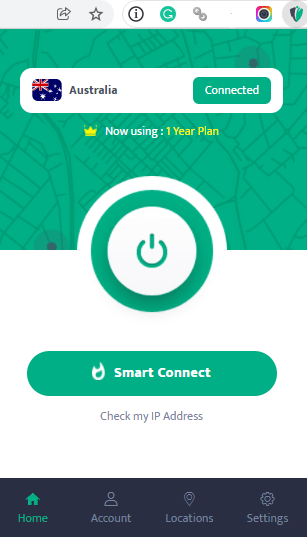 If you’re not interested in downloading the iProVPN app, you could always use its browser extension for Chrome and Firefox. The browser extension apps for iProVPN are easy to use. However, you won’t be able to switch between protocols, nor use a Kill Switch for it. There is an Ad-Blocker available on it though, which comes in very handy, considering most websites are loaded with apps. 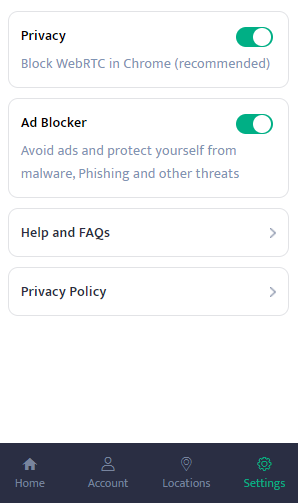 Apart from iProVPN being located in the British Virgin Islands, which is a privacy-friendly region, away from the 14-eyes alliance, there are other factors to dive into. You need to check whether this provider logs user data or whether its customer support is trustworthy. These factors are equally important that sum up whether or not the VPN is worth your time. Let’s first start with:

iProVPN claims to be a no-logs VPN, as far as its policy states. They even highlighted the information collected, which is extremely minimal, like your email ID, chat box, and payment data. Here’s a snippet from their no-logs policy:

Chat support is equally important, considering that most users need round-the-clock assistance to set up the apps on certain devices, or when they have issues connecting. The iProVPN chat support is very reliable according to me. They answered all queries and provided links along with each question. This is something most VPNs fail to offer.

Overall, iProVPN is a great VPN! The security features work, the servers unblock a number of popular streaming services and the speeds are great! Hopefully, this iProVPN review will help you decide if it’s good enough for you. However, if you’re looking for other affordable VPNs, I recommend taking a look at our VPN deals and discount page.