Surfshark has always been one step ahead in the innovation game – it’s latest addition being the Surfshark Nexus SDN (Software Defined Network.) This latest technology will be added to its consumer VPN, but works quite differently from the regular VPN product. For surety, the Surfshark Nexus technology is going to increase online privacy and security for users in the long haul.

What is Surfshark Nexus?

If you’ve ever been a Surfshark VPN user, then you probably already know a lot about the software. Surfshark often gets great reviews as it is, but the new Nexus consumer VPN innovation, based on the SDN technology is going to hit the benchmark for better things to come!

This diagram will help you understand how Surfshark Nexus works: 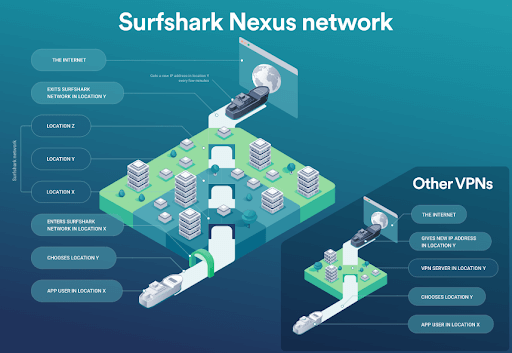 You know how the regular consumer VPN works, you download and install the VPN and connect to a server of choice. This only allows you to connect to single servers, basically not an entire network of them.

It’s how Nexus differs from the regular consumer VPN usage. However, with the Nexus innovation, it allows you to connect to an entire network of servers. Through that, it then routes you to a chosen and destined server location.

For further explanation, when you sign in and connect to the VPN, it will first redirect you to the Nexus entry point. This will be the starting point of faster speeds and better performance. It will then reroute your traffic not through one, but a whole network of servers for better privacy and anonymity online.

This will make it impossible for websites or other external factors to track your activities and your physical IP address. On the last exit node, you’ll still get the IP address you wanted.

If you’re wondering how and why Surfshark Nexus functionality is better than the regular VPN connection, we’ve highlighted some points below to give you a complete outlook. But, in short, there have been some privacy and connectivity issues while connecting to single servers, which is what Nexus is going to resolve.

Once you connect to Nexus, it will allow Surfshark to utilize and get the ball rolling on all of its new features that come with this innovation. Here is what you should expect:

It’s exactly about how it’s named. Most cases, every user connects to one IP address, which might be secure, but only for a short time. Leaving Surfshark out of the picture, most users connected to a VPN have often complained of their IP addresses being compromised.

With Nexus, you will be allowed to maintain your VPN connection without disconnecting, all while your IP addresses are being rotated. The best part about this feature is that you have the liberty to choose which server location, region etc.

As mentioned above, when you connect to Nexus, it will give you a new IP address every time you’re on a different website or service. This is best for hiding your browsing history or the patterns you use.

Usually, a VPN multihop feature allows you to connect to two servers in one go for extra anonymity, but these servers are usually fixed and given by the provider.

With the Surfshark Nexus Dynamic MultiHop feature, you will be allowed to choose the entry and exit VPN locations and in any setting that you like.

This happens when you connect to a server far from your physical location. With Nexus, it will connect you to the best and fastest entry server that is closest to your location. The result? More stable speeds.

For app maintenance or the overall issues you experience while using the VPN app, all will be able to be tackled without disconnecting you from the VPN.

This is to ensure better and stable connections on whatever VPN app you’re using and over your internet connection. It’s also to make sure that you don’t experience any DNS or IP leak issues while connecting to the Surfshark servers.

When you usually connect to a VPN, all your traffic is rerouted through one encrypted server, and it pretty much works the same for every website you visit, every streaming service you use, or for every app you install.

However, what Nexus brings in store for you is a more customized and secure routing of traffic. It will be according to the services you use for better VPN performance overall. If you’re worried about being tracked by the VPN provider, don’t worry about it. No data is tracked nor stored, and the only thing that will be seen is the traffic patterns within the network.

When should we expect Nexus?

The Surfshark Nexus technology is already one foot out the door and ready to get to you. Most of its functionality and structuring is already on the roll. The features highlighted above are what you’ll be expecting. For instance, you can use the IP rotator feature.

The other highlighted features will soon be available too, with an addition of more, expected gradually during 2022 and 2023. If you haven’t signed up with Surfshark yet, it’s time you get the ball rolling and enter the new era of online privacy protection.

All you need to do is sign up for the service by creating your account and choosing the most affordable package. There’s even a free trial and 30-day money-back guarantee you can use.

Will NordVPN get access to the same Nexus pack?

The latest news is that Surfshark and NordVPN are both merging over one roof as two separate services. However, some wonder if Surfshark Nexus tech will be added to NordVPN and for its users.

Here’s the situation: Surfshark owns the patent rights. Even though other providers have the obligation to duplicate the infrastructure onto their own software, Surfshark still has the legal rights to it. Surfshark took over a year to create the SDN network (Software Defined Technology). So, it’s very unlikely that other VPN providers will adopt it soon.

Surfshark has always been the pioneer of innovative VPN technology. It’s also one of the best providers that actually practices what it boasts.

The latest Surfshark Nexus SDN technology is the starting point for all great things to come. It will take you into the future of VPN protection. If you’re wondering whether its functionality is any different from a regular VPN service, then yes and no.

The basics are all the same, like connecting you to the best server, exiting the same server, and encrypting your traffic throughout. It furthermore hides your real IP address. The only difference? Bigger and better means of security.

Contents hide
What is Surfshark Nexus?
When should we expect Nexus?
Will NordVPN get access to the same Nexus pack?
To conclude