The Surfshark Black Friday and Cyber Monday deals are now live! Get them before the season ends, which is on the 29th of November!

Surfshark is offering a jaw-dropping 84% over its 2-year plan and throws in 2 months FREE!

In general, Surfshark is one of the most affordable VPNs in the market. However, it’s offering an even bigger discount over its 2-year package, which is around 84% off this Black Friday! 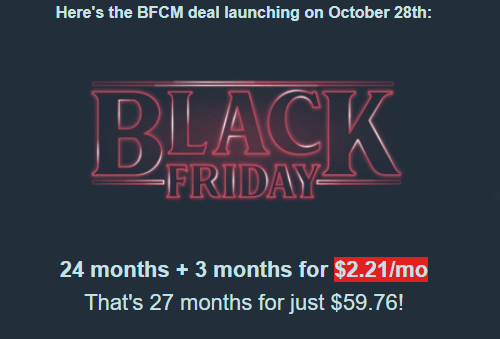 Apart from the 2-year + 2 months free discount on the Black Friday special, Surfshark is also offering deals on other packages. They are:

Enjoy the Incogni deal that offers a 1-year subscription for 60% off with the code – INCOGNI60 (code will work from October 27 till December 4; the final price at checkout – is $55.58).

As mentioned above, Surfshark is and has always been one of the more affordable VPN services that usually offer huge discount coupons on its service. The current Surfshark deal is for $2.22/mo. for its 2-year plan + 2 months free! That is a huge 83% off!

Where and how can you get the Surfshark deal?

The Black Friday Deals started on the 27th of October until the 4th of December, so get it before it ends! Don’t know where to find it? You can avail of it from this link!

Herer’s what you need to do:

GET 83% OFF ON THE SURFSHARK BLACK FRIDAY DEAL HERE!

What features and perks can you get during this deal?

There are many top VPN services in the industry, but Surfshark is usually always among the top 5! In comparison to older providers, it offers some of the best features and continuously manages to add many upgrades to its service.

If you take a look below this line, you’ll have a clear idea of all the features you’ll be investing in with its Black Friday deals:

For a wider look into this provider’s features and overall performance, take a look at this Surfshark review.

Just in case Surfshark isn’t quite what you’re looking for, there are other Black Friday VPN deals happening that might interest you! However, here’s a list of the top providers offering the best Black Friday deals right now:

Lastly, before you leave, make sure you check out our deals page for the best VPN discounts and packages all year round!