ExpressVPN tops the list of best VPNs in the field, and is usually the most expensive! Here’s your chance to get ExpressVPN during its Black Friday and Cyber Monday sales going at 49% off + 3 months FREE over its 1-year plan!

ExpressVPN is often known by many as the priciest VPN provider. However, if you take a look at how ExpressVPN performs overall, you’ll understand just why. With that said, here’s your chance to get the biggest discount on its services during Black Friday and its Cyber Monday Special!

ExpressVPN is offering 49% off + 3 months free attached to its 1-year package! 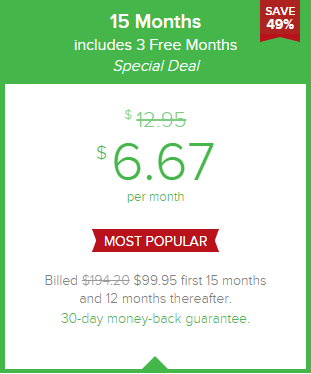 With this deal, you’ll be paying $6.67/mo. for 1-year and get 3 months free on top of your subscription!

We’ve tested numerous VPNs in a matter of years, but nothing seems to top ExpressVPN! So, with this 49% discount at $6.67/mo., billed at $99.95, you’ll be getting a 3-month free extension on VPN services!

If this interests you, make sure you get the deal from here before the Black Friday and Cyber Monday deals end!

Why are the ExpressVPN deals the best during Black Friday and Cyber Monday?

Everyone knows that Black Friday usually brings about the best deals and discounts on practically anything you can think of! This is why you’ll probably get way cheaper discounts on VPN services. And, in fact, ExpressVPN is offering an affordable $6.67/mo. for 1-year and giving away 3 months of free services as a bonus for Black Friday. You’ll also be able to avail them during Cyber Monday.

Is ExpressVPN offering any other special deals this Black Friday?

When it comes to deals, ExpressVPN usually offers regular or annual discount coupons over most of its packages. However, the 49% discount is the most affordable plan available this Black Friday and Cyber Monday. Other than that, there are two other packages you can have a look at. They are:

If you think about it, you’ll practically be saving nothing on the regular price and the 6-month deal.

How to get the ExpressVPN Black Friday deal?

You can now use your ExpressVPN service for 1-year + 3 months free! Avail your deals in the link below:

GET YOUR 49% OFF ON THE EXPRESSVPN BLACK FRIDAY DEALS HERE!

What should features and perks should you expect?

ExpressVPN, among many other top VPN services, renders some of the best features, speeds and mainly robust security features. Here’s an idea of what you should expect:

Need more details? You can find them in an ExpressVPN review.

Is ExpressVPN out of your budget? Not happy with what you see? There are other Black Friday VPN deals that you can have a look at. For quick access to the Black Friday deals offered by top providers in the industry, take a look below:

Just in case you happen to miss out on the Black Friday VPN deals, you can take a look at our VPN deals page. We’re constantly updating the latest deals and discounts of the best providers in the industry!