This tutorial works on 2nd and 3rd-generation Firestick and Fire TV, and even on Fire TV Cube using its Amazon app.

ExpressVPN usually has a pretty straightforward download and installation guide for Windows but is quite different when it comes to Firestick. In fact, you’re probably thinking “How to jailbreak Firestick” is the same as sideloading apps.

There is an ExpressVPN Firestick dedicated app that you can find on the Amazon App Store so you wouldn’t need to know how to jailbreak Firestick. If, however, this method doesn’t seem to work for you, or you can’t access the ExpressVPN app from the Amazon store, there is another method called Sideloading.

This guide will highlight two ways for you to get the ExpressVPN Firestick app on your device. Let’s first start with:

Method 1: How to install ExpressVPN Firestick app from the Amazon Store 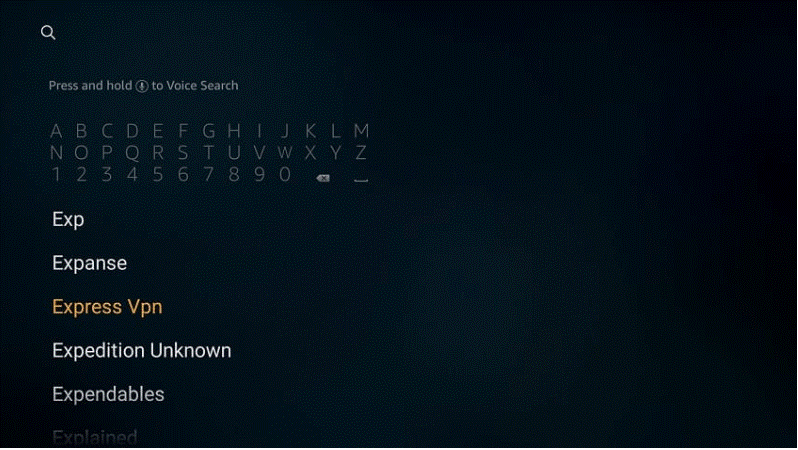 Can’t seem to get this method started? Check another alternative method below.

Method 2: How to install the ExpressVPN Firestick APK Sideloading method

There are times when you won’t be able to access the ExpressVPN app on Amazon, due to restrictions or censor blocks within your country.

There are times when you won’t be able to access the ExpressVPN Firestick app on Amazon, due to restrictions or censor blocks within your country. 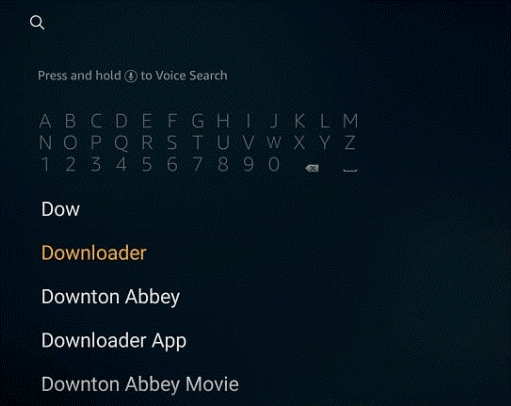 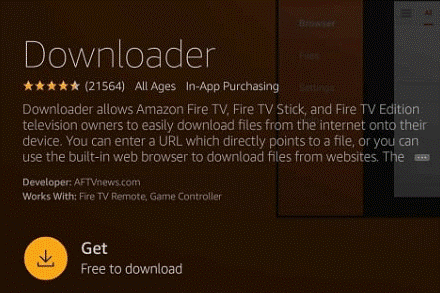 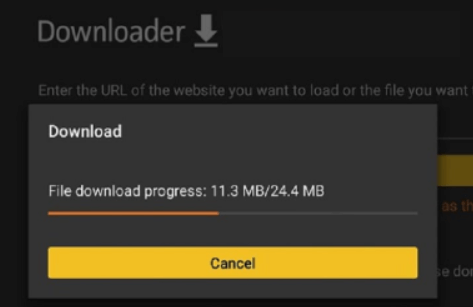 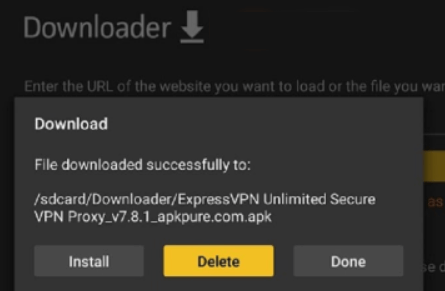 That’s it! You’re all done!

Get ExpressVPN for Firestick

Can you use ExpressVPN Firestick App on First-Generation Fire TV?

However, there are other ways you can use ExpressVPN on it, as promised. These are by:

If this was any other VPN provider, you’d probably have to invest in a router that comes flashed with Router Firmware. The great thing about ExpressVPN is that provides its own router firmware.

Use it to connect ExpressVPN to your VPN-supported router, and in turn, will be able to connect to multiple other devices including your first-generation Firestick, in one go.

MediaStreamer is a smart DNS proxy, brought to you by ExpressVPN. It’s created to unblock vast amounts of streaming services that aren’t available in your country. These are mostly restricted due to Geo-blocks.

Since the first-generation Firestick cannot support VPN apps, you can utilize the ExpressVPN MediaStreamer proxy to replace all the default DNS servers on your device. You’ll find this in the Wifi settings.

Creating a Hotspot shield that is VPN protected

Sometimes using a router for connecting ExpressVPN to your Fire device won’t work, especially if it’s not VPN compatible. In this case, instead of panicking and getting yourself a new router, what you can do is, use your desktop or laptop.

Most Windows desktop/laptops come with a default option to share internet connections. This can then create a secure Wifi Hotspot, and be used to connect to your first-generation Fire TV Stick device.

Why do you need a VPN for Firestick or Fire TV?

With the rise of notorious cybersecurity threats on the horizon, it’s important for extremely heavy or regular internet users to take advantage of the best online security a VPN can provide you. Using a VPN, in general, has its perks. With that in mind, here are a few reasons as to why you may need a VPN for Firestick:

One of the main reasons we use a VPN is to gain access to geo-blocked streaming services like Netflix while traveling that isn’t readily available outside the US, for instance, Marvel movies. There’s always a lack of libraries or restricted content, but with the help of the best VPN, you’ll unlock a whole plethora of channels on your Firestick. ExpressVPN has managed to unblock unlimited platforms. Some of these include BBC iPlayer,  Amazon Prime, Hulu, Disney Plus, Comcast, and more. Additionally, with the ExpressVPN Firestick app on your device, you can access some of the best IPTV streaming apps that you might not be able to do initially.

You can just about connect to any server in any country and access the best streaming services on your Fire TV. For instance, I used the US server to watch Disney Plus in Philippines, Mexico, and even the UK server to access the BBC iPlayer app on Firestick. ExpressVPN worked well for all!

Speaking of streaming services, Kodi is the most widely used open-source streaming platform for Firestick. However great a media streamer it may be, it does come with risks. Using it with a VPN will secure your connection and experience. Plus, it’s one of the best VPNs to use with Real Debrid on Kodi and Firestick apps.

Since many streaming services aren’t exactly allowed to be accessed within geo-censored countries, using ExpressVPN with it will heighten your security measures. For instance access to IPTVservices or streaming apps like Netflix etc. It’ll provide you with the best encryption and other features that’ll protect your anonymity.

Many people take their Firestick devices with them when traveling, and to access it, you’re going to need a strong Wifi connection. But what happens when you connect to unknown Wifi sources. A public Wifi is extremely harmful and shady; putting your data and device at risk. A VPN can secure that connection with the best encryption.

Slow speeds are a major issue while streaming your favorite movie, TV show, or even while gaming. It gets really annoying when you have to wait way longer just to download one movie, especially if you’ve paid for a fast internet connection. A Firestick VPN like ExpressVPN can easily help you bypass ISP throttling while connected to any server.

Many VPN users seem to find ExpressVPN a little overpriced, which starts at $12.95/mo. for its monthly subscription. But, as much as that is true, ExpressVPN is still one of the top-grade providers that offer special discounts.

So, if you’re planning on getting ExpressVPN for your Firestick device, definitely check out its budgeted price of $6.67/mo. for its 1-year plan + 3 months free.

With that in mind, there are many reasons why users prefer ExpressVPN before other providers, and why most users choose ExpressVPN for Firestick and other devices. Here’s why:

There are many more features that ExpressVPN offers, which is why it’s loved by users worldwide.

How do I know if ExpressVPN works with Firestick?

When you connect to the VPN by clicking on the best server, your IP address is automatically changed according to the location you chose. Here are some tips you can use, to know whether the ExpressVPN Firestick app works:

Just in case the ExpressVPN Firestick app is not working, there are a few fixes that you can do. They are:

Can I use a free VPN for Firestick?

A free VPN isn’t the best option for Firestick, however, there are many free providers that do work with it, and that follow strict privacy policies. Instead of going for a free VPN to test out on Firestick, why not try out the ExpressVPN free trial? It’s safer, provides premium access, and won’t log your data.

Do you need a VPN to jailbreak Firestick?

Jailbreaking your Amazon Firestick might not be at the top of your mind, but using a VPN to make it happen will ensure you safe access to all your favorite movies, TV shows, and more. It’s why we recommend ExpressVPN for Amazon Fire Stick devices.

Does ExpressVPN work on Firestick?

How do you activate ExpressVPN on Firestick?

To get the ExpressVPN app on Firestick, you first need to sign up for the VPN from its website and create your account. Then, go to your Firestick and search for the ExpressVPN app, install it and then use it. However, if you’re not able to access the Amazon Store where you live, you can alternatively install ExpressVPN on Firestick by using the Sideloading method, also known as jailbreaking.

Why is my VPN not working with Firestick?

If your VPN fails to work with Firestick, you can uninstall the app and install it again, or reboot your device. You can also restart the modem or switch between VPN servers. It’s why we recommend ExpressVPN for Firestick since it never fails to work.

How much does ExpressVPN cost for Firestick?

Whether you need ExpressVPN for Firestick or for another device, the price is all the same. The most affordable plan is $6.67/mo. for the 1-year plan + 3 months free. It saves you around 49% from the regular monthly plan.

Can I use the same ExpressVPN Firestick app subscription on other devices?

Yes, you can. One ExpressVPN subscription allows you to connect on up to 5 devices simultaneously. When you get a subscription, you can install the ExpressVPN app on Firestick, your Windows or even on Android and iOS smartphones.

Is ExpressVPN Firestick app better than NordVPN or vice versa?

Both the NordVPN and ExpressVPN Firestick apps are great, but choosing the better alternative depends entirely on what you’re looking for in a VPN. NordVPN is known for its security and privacy-centric features while ExpressVPN for Firestick is about speeds, access to restricted streaming services, and security. However, where affordability matters, NordVPN would be the better option. With it, you can change your IP address on Firestick, get the best IPTV streaming services and other apps like Hulu, BBC iPlayer or Disney+.

ExpressVPN is a top-tier VPN. It not only offers a free trial and a 30-day refund policy but many other features! What we love most is that ExpressVPN goes well with most Fire TV devices (Firestick, Fire TV, Fire TV Cube), and the speeds are some of the fastest.

Plus, you can even use it on a first-generation FireStick, using the ExpressVPN MediaStreamer feature. This is why the ExpressVPN Firestick app is currently one of the best options for your device.

Another great thing about testing ExpressVPN on your Firestick is that if you’re not fully satisfied, you can cancel your account and ask for a refund within the first 30-days.